CINÉTICA is an online film magazine from Brazil, active since 2006. In March 2013, we started this blog to publish English versions of articles selected from our archives.

Illustrators and writers share one same source of angst: staring at the blank page. While in cinema blank is the overabundance of (luminous) information – an element that’s at the core of films as distinct as Ingmar Bergman’s Persona (1966), Philippe Garrel’s Le Revelateur (1968) and Frank Darabont’s The Mist (2007) – in both writing and drawing blank is what comes before creation. It is from the blank page, here blown up as film screen, that Alê Abreu starts in The Boy and the World, and this fabricated impression that audience and artist share the same starting point, the zero degree of creation, is a handshake that guarantees our fidelity for the rest of the projection. Rejoicing in angst, it is therefore easy to follow the film’s impulse to start filling up the screen: to start off with the most primal trace, the simplest figurative sketch, and then, little by little, incorporate other forms, colors and techniques, until the page is filled with life. 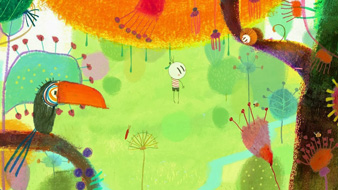 It’s a risky process. Just like the writer must dictate a certain rhythm to the typing of the words, trying to find the exact dose between the brakes of semantical precision and the threat of the libertine flourishing set by stream of consciousness, the risk is that the beauty of the original trembling angst might be suffocated by the baroque virtuosity of the oversaturated page (an even bigger threat in the craft of animation, which is always moved by some kind of technical self-validation). The Boy and the World, however, is a fatally anguished film, because Alê Abreu not only finds the sweet spot between these two poles, but also brings to the center of the film the nuggets of the Concretist tradition: the weight of the blank page is converted into potency of expression. 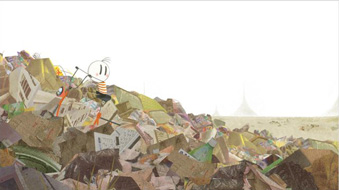 In the film, the blank background isn’t exactly the absence of expression, but the exact expression of absence. And since its protagonist is a made-up boy that heads out to see the world (and the world – all children know – is far from being only a beautiful place) when he realizes his father is gone, the idea of letting the audience partake in the drawing of every stepping stone along the way with just the right timing to anticipate the boy’s following step is a matter of poetic justice. We’re all in this together – audience, boy and world – following the discreet guide of the filmmaker. And just the same, when his father leaves, the trem dives into the white immensity of the absent background, getting lost in the ungraspable nothingness that hovers every step given on screen. From blank we came and to blank we shall return. If The Boy and the World is a movie for children, these kids for sure are melancholic. 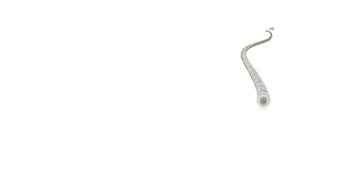 But the brackets that frame this journey that is born out of and dies back into nothingness (or close) are almost identical scenes, that bookend the film in the opposite direction of its teleological journey: a dot that expands on the white screen, until it reveals itself as some sort of mandala containing other dots that expand on the screen until… in the end, backtracking that movement, the world becomes a mandala again, which then becomes a small dot that persists on the center of the screen, until the credits roll. There is a structural end in this choice, but also a material objective: all that blank is merely a frame for the trace. From trace it is possible to create a world or a boy, and from trace it is possible to put the boy in the world and the world inside the boy. In The Boy and the World, it is trace who is the true protagonist. 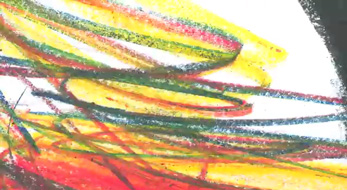 With each new scene, Abreu seems to search for the only specific trace capable of expressing the ontology of what he wants to show. While there are no doubts life would be much simpler if appearances and essences coincided – a matter as important to Plato and Marx as it was to Vertov (three names that are at the core of this film) – the task of trying to match them seems less impossible on drawing. As the film unfolds, trace – in its main line, searching form an impossible synthesis between the minimalistic genius of a Don Hertzfeldt with the exuberant virtuosity of a Bill Plympton – gropes for this image that could be its own ontology, carrying in its own body all of its meaning. With a hand that is free, albeit never pure (because it does not refrain from combining Touloucse Lautrec, León Ferrari, Jorge Bodanzky and collages made with magazine scraps in search for something that transcends referentiality and mere technique), the movie finds visual constructions that are surprisingly poignant in their literality: the police marching band playing instruments shaped like guns; the models who appear in advertisement who are a grotesque collage of disproportional limbs and features; the disconcerting geometry that connects rural work with the factory assembly lines and the traveling containers on a ship – and that, by the mere contrast with the free and clean trace that draws the protagonist, speaks louder than any text ever could. The Boy and the World is all made of remarkable formal finds such as these, sprinkled across the film by a remarkably light hand, that refrains from interrupting the flow of the projection to showcase its undeniable abilities. 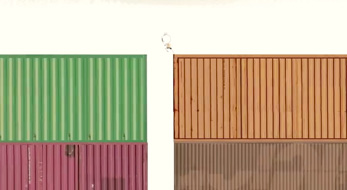 Since the movie does not have dialogues – at least, not that we, traceless creatures, can understand – the som is given the tough task of amplifying the protagonist’s voice: it’s necessary to make trace itself something one can hear. Hence the clever choice of clearing up the background in terms of sound as well, detaching each single stroke of sound in the foreground from its surroundings (like they do with the image), and at the same time braiding some kind of symphony from these sparse elements, an andante that matches the image of a pencil that keeps drawing one continuous line, never taken off the page. In certain moments, this work leads to subtle, smile-inducing narrative punctuations – the best one, hands down, is the one where three identical doors that lead to three different spaces, expressed solely through sound: a brothel, a church and a dive bar. Even when the sound plays a more concrete role in the scenes, there’s space for the often smart interaction between foley and music – like a rain that falls as handclaps or the flowers that are pulled as pizzicatos on a guitar string. If, on the one hand, such interactions sometimes fails do go past the banality of the Mickey Mouse effect, this very same interaction saves subtle surprises that sparkle across the whole film. 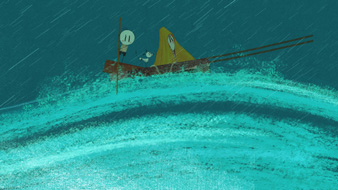 However, a sound is also a trace, and a trace is only unique for its texture, its density, its natural infidelity that keeps it from being subjected to the possibility of repetition. While there are notable achievements in the sound track of the film, The Boy and the World still suffers from the hi-fi syndrome that sacrifices the distinction of each timbre, each small sound element, all for a planified clarity that adheres to the market standard, but ends up sounding a bit bland. Despite the remarkable creativity of the construction, the sound lacks the necessary leap past functionality, which can be found in the enchanting handmade quality of the imagery – something that has more to do with the personality of the sound than with its proficiency. 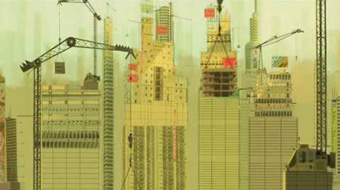 However, these proper tones are only one feature of a much bigger wall (even if made out of fidelity and admiration) built around the relation between the film and its spectator: cinema isn’t only a matter of trace. Not only of mere creativity or of a just gaze. While The Boy and the World is indeed a very happy surprise in recent Brazilian cinema (and in cinema as a whole), in the end it’s hard to calm down the anxiety of having been through an experience that is somewhat incomplete. In part, that happens due to a lack in fine tuning the paces which are so essential to the films symphonic ambition. While the image of a narrative that scrolls like a sheet of music, or that unravels like a dropped yarn, is key to the experience of the film, the difficulty in scaling the duration of the sequences and their transitions end up calling excessive attention to the individual dramatic blocks. But in another part, and a more important one, the limit is in the feeling that the film rejects getting too close to the abyss – and on that note, the arrival of the father’s train remains as the most exemplary moment of the latent dramatic power the film can have but often fails to follow through with. The Boy and the World is a melancholic film indeed, but its sadness holds an endless power that the movie seems to in fact be quite scared of. 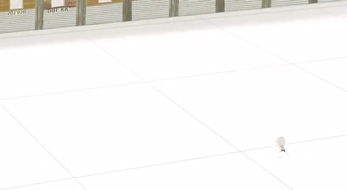 It is precisely the authority over these two elements – time and dramatic intensity – by Pete Docter and Bob Peterson in the opening montage of Up (2009) – to stay within the confinements of animation – that allows the embrace of the abyss, forcing the spectator to come to terms with the fact that their guide might not be able to bring them back. It is this courage that separates beautiful films from intense cinematic experiences that can actually be transformative. The deepest sadness that comes from watching The Boy and the World is having to leave the theater very much aware that what was just seen was a thing of beauty, but at the same time having to make an effort to shut up the voices that keep screaming that this beautiful trace lacked the courage (and the petulance) of willing to be larger than the frame.